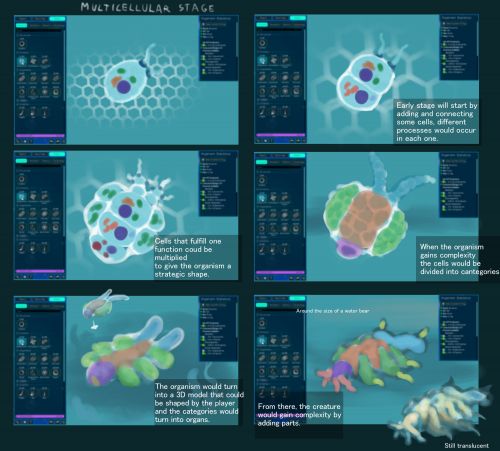 In the Multicellular Stage, your colony will become more complex and specialized, as well as experiencing a transition into a 3D environment, until it becomes a macroscopic multicellular organism. The stage ends when your creature first develops a nervous system and thus sentience.

Life in the oceans flourishes. There will be a lot of diversity. The world has suddenly gotten a lot bigger for the player.

The player will now control a colony of cells that form a larger organism. The scale will gradually increase in size.

The stage starts when one cell binds to another through use of Adhesion Proteins.

It ends when the player's species evolves a nervous system.

The gameplay of the first segment of the stage will feel a lot like the Microbe Stage. Gameplay will continue on the 2D plane with other cells, but the difference will be that the player will now control a colony.

In the editor, the player can now create and edit cell types in addition to making changes to the structure and organelles of those cells. Any change made to one cell of a cell type in the colony will automatically apply to all other cells of that type. Using different cell types the player will be able to specialize different cells in his colony towards different functions, giving them a big advantage over unicellular organisms.

There is a separate page for the Multicellular Stage GDD describing the stage mechanics in more details.

Nothing has been discussed.

So far no solid work has started on the Multicellular Stage besides some concepts. The topics of the stage are mostly in discussion and pending the completion of more features of the Microbe Stage.