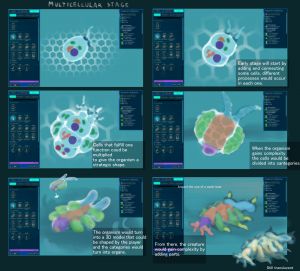 The Organism Editor is one of the five main editors in Thrive, and the second editor to be unlocked. It is used after the Microbe Stage is completed, and is the successor to the Microbe Editor. It allows the player to edit a more complicated organism, and is most useful in the Multicellular, and Aware stages.

Like the Microbe Editor, it may become accessible later in the game for the development of complex organisms for the player's race. To create organisms in such a manner, the player's race would need to have researched a certain technology or group of technologies.

The "Caste" option will allow you to differentiate between sexes and types of your organism (think:ants). Once you have created an organism, you can click "Add Caste" and your organism will be copied into another caste slot, where you can edit it to produce a differentiated caste. You can edit what castes are needed for reproduction, individual AI for each caste, and the proportions of castes in the species.

These separate construction systems will be handled in different tabs of a construction panel. Skeletal, organ, skinning, and textures/detailing are separate tabs and will bring up separate views. Some tabs will have sub tabs, such as the Organ Systems tab.

All of these categories can be used on one organism, and they can all be used in any one of the specific skeletal parts. For example, a hand could be a tentacle with three fingers and leaves.

Fungus parts are still under discussion. They may be incorporated into plant parts, left out altogether, or be added to a separate section all their own.

Muscles will wrap around any bones in a procedural way. Larger muscles will attach to larger bones. You can make muscles larger/smaller, but you can't delete procedurally generated muscle. You can add muscle, but remember that larger muscles consume more energy, and smaller ones pose the risk of snapping. Muscles will not wrap around arthropod, plant, or fungi parts. Wormacle invertebrate parts will be filled in by muscle.

You can also give your organism fat stores. You brush on where fat is stored, and if your creature eats enough, these places will start to expand.

The nervous system is primarily your creature's brain/ganglion. It will be constructed by molding balls of nervous tissue together to obtain the general shape of the brain/ganglion. You can have as many of these as you like; nerves will be invisible.

Leaves are the metabolic, circulatory, and respiratory system for plants. Leaves will be populated in the same way as branches, but there will be a leaf editor as well. It pops up and lets you draw the leaf in a box. You can save that leaf and the drawn part will become the 2d part and a model will be made procedurally for the 3d part. The 3d part is a cutout of the outline of your leaf on a slightly folded plane. Flowers and fruit will be procedurally populated wherever you specify. There will be many, many different types of flowers, and each will grow into one of a few types of fruit possible for that flower.

Once you are done muscling your animal, you skin it and add all of the details. Skin will be wrapped procedurally around all muscle. Body coverings such as fur, feathers, and skin tags will be instanced onto your organism with an instancing brush.

There will be a skin connecting tool which can connect two parts with skin. In this way, you can create bat wings. A certain surface area to weight ratio of feathers or skin gives your creature the ability to fly. There will also be a flight feather tool. You select a limb to be the wing part, and then the tool will add flight feathers to the limb that are large enough to let the creature fly. Once this is done, the wing will try to animate itself by folding up against the body and stretching itself out all the way. It will then try a few different flaps.

There will also be a skin removal tool for beaks and bone plates that you don't want to be covered by skin.

Detail parts are just like the ones in Spore. There are larger feathers, camouflage, odd lumps, and more. Put them wherever you want.

Coloring and texturing can be done procedurally or by the player using brushes constructed of a skin texture plus a few colors.

Fur and feathers will be 1-dimensional billboards or 2-dimensional static parts populated onto your creature with a brush or procedurally.

This is where you decide how big your organism is. Basically, you start out as a silhouette that is human-sized, next to a silhouette of a human, elephant, and mouse. You can get up to about 300 ft long or down to fly-size, all by scrolling up or down on your silhouette. Underneath the silhouette is your dimensions and mass, which will change depending on your silhouette's size. Also, if you set up one dimension or your mass, the entire thing will snap to comply with that. So if my creature is 1m by 1m by 1m and five kilos and I want it to be 2m long, I set in 2m as the length, and then the silhouette,height, width and mass change accordingly.

As well, the sizing board will be the virtual representation of a planets capability to sustain viable life. If you were to attempt the creation of a creature that is too large for a planet, whether as a result of gravity, air density and composition, as well as solar exposure. These resources, if they are not available in sufficient proportions, cannot support a large creature, which limits the maximum size of a player-created creature.

The basic environment is a 900m wide volcanic crater. A player decides whether the entire thing is in the deep sea, under a little water, or some water/some land, with a 300m island in the middle. Different plants, cliffs, caves, and hills let you test out your creature in its natural environment. If your creature can fly, it will have plenty of airspace to drift or flap around. The editor ceiling is about 900m high, and the player can select what sorts of gases and density the air is.