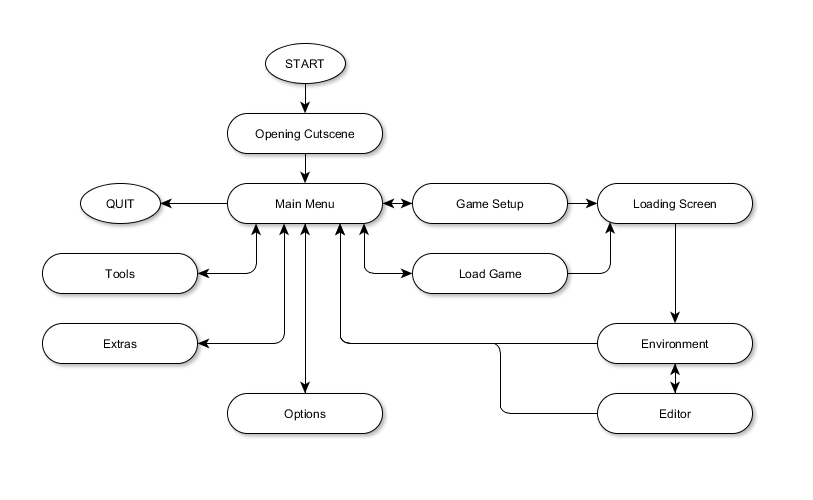 As the flowchart above shows, on running the game the player will be shown the opening cutscene (skippable with a key press – likely escape, enter and the space bar) while the main title screen loads in the background. Every other game state can be accessed via the title screen menu, though some (like the environment and editor) rely on choices in either the game setup screen or load game screen.

The title screen (or main menu) is the hub for all other game states.

Allows the player to set parameters for a new game. If new options are made available in a new release, the player should be prompted to choose even when loading a saved game.

All categories have a randomise option.

(SOME OF THIS HAS ALREADY BEEN UPDATED TO REFLECT RECENT CHANGES)

While the player spends most of their time in the environment, their success in gameplay is determined by how thoughtful they are in the microbe editor, where the player can change their species’ physical and behavioral characteristics.

(SOME OF THIS HAS ALREADY BEEN UPDATED TO REFLECT RECENT CHANGES)

Most of the player's actions involve the editing panel, which takes up the left side of the screen. Buttons allow switching between the following tabs.

In the main options screen, the player can make changes to game properties.

Though not essential for the game experience, this screen gives the player more information and goodies.

Tools for developers and extra game modes for players.

Loading screens hold the other major screens together and pass the time while they, err, load.