There is a dedicated page about the Multicellular Stage in general.

Much like the prior stage, the Multicellular stage possesses two types of gameplay: Environmental gameplay which consists of the player's organism exploring and surviving it's environment, and editor gameplay which involves the player modifying and adapting their species to better survive while studying changes in the world.

Much like the Microbe Stage, environmental gameplay is based on:

The transition from the previous stage is performed by evolving while being part of a cellular colony of appropriate size. This takes the player straight from microbial gameplay to the early multicellular editor. In order to reach the next stage, the player must master cell specialization and tissue development, and effectively create a brain for their organism to become aware.

The early mutilcellular stage transitions into the late when the player possesses an appropriate number of cells in their organism's body plan. Once the requirements are met cells are replaced with tissue, and the player's early body-plan becomes the metaball torso section of their late stage organism. This transition to a macroscopic creature also stops cells from being visible, meaning that this is a major environment change as the player can no longer interact with cells, instead only being able to interact with other macroscopic species made from metaballs in a 3D environment.

Movement will be similar to the microbe stage, with your organism facing towards the cursor, and using the WASD keys to move your organism in the accompanying directions relative to the mouse position. This scheme will be used for the early multicellular stage. In the later multicellular stage (with full 3D movement and environment), new additions to the controls are the ability to ascend/jump or descend/crouch using the space key and either Ctrl or C. As well as to pan the camera by turning your organism's head using right click or some other designated button. A possible / likely alternative is to use mouse controls like most 3D games to control the look direction of the player's creature.

An alternative proposal is to use the W and S keys to accelerate or back away from the cursor position, and use the A and D keys to adjust rotation.

The early multicellular editor takes place on a hex-grid much like the microbe editor. Instead of parts, hexes will represent entire cells that the player places on their organism to shape it. Each cell can be edited to create new cell types, or simply adapt the old. This is the body plan editor.

Once the player's organism is complex enough with a certain amount of cells, the player will be taken to the late stage editor. There will be a button either in the editor or in the stage when the player is ready to go to the editor to become a macroscopic organism. This is where the editor moves to a 3D perspective and allows the player to freely sculpt their organism with tissues (via meta-balls) instead of individual cells. The player's previous body-plan will be converted into a 3D shape that serves as the initial torso of their organism. The likely initial approach is to convert each placed cell into a metaball.

Much like the microbe stage, the multicellular stage will feature a limited currency, MP, that the player can spend to evolve their organism. All mutations, whether it be placing a mitochondrion on a cell or extending the length of a limb, will deduct a percentage of MP from the same pool. The various MP consuming mutations are as follows: 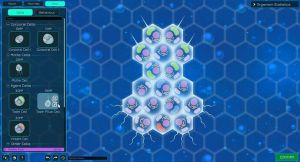 A concept of the early multicellular editor.

The early organism editor takes place in a familiar 2D hex-grid where players will place entire cells onto their organism to shape it. Initially, they will only have a single cell to choose from, but by creating new variants through the microbe editor; they will be able to create distinct organs and regions on their body. Each cell will visually remain 1 hex in size at this scale, regardless of how many parts they have.

Much like the microbe editor, the multicellular editor features three separate tabs in the editor. 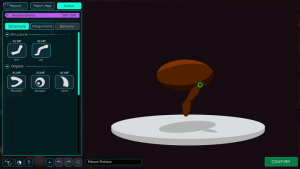 A concept of the late multicellular editor